5% of annual revenue—that’s the estimate of how much money the typical organization loses to fraud, according to participants in the 2010 Report to the Nations on Occupational Fraud and Abuse.

I am a few hours away fro leaving for the National Retail Federation’s Loss Prevention Show in Atlanta this week and I was reading the 2010 Report to the Nations on Occupational Fraud and Abuse from one of my favorite organizations that I am a member the Association of Certified Fraud Examiners (ACFE). 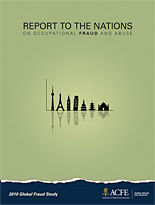 The report, prepared by the ACFE, an international organization of more than 50,000 fraud examiners, CPAs, law enforcement professionals, government officials and others, examines a wide swath of business-related fraud in an effort to pinpoint problems and highlight solutions. The fraud cases at issue in the report lasted a median 18 months before being detected. While million-dollar-plus financial statement frauds made up a small percentage of the crimes, the majority were less complex asset misappropriation cases involving billing, check tampering, payroll and expense report schemes.
A few of the key findings are:
Conclusions and Recommendations

After reading all of this I expect to have a great show.  Stop by booth 1140 if you are in Atlanta this week.
Download your own copy of the ACFE report at http://www.acfe.com/rttn/2010-rttn.asp
Learn more about ReTel Technologies Security Policy & Procedure Auditing, EAS Event-Driven Verification, Performance Standards Verification, On-Demand Investigations, Operational Auditing and      Consumer Insights at ReTel Technologies Website’s: http://www.reteltechnologies.com/
at June 13, 2010